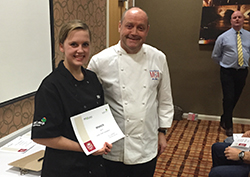 The competition was held on Tuesday 20th January at Kendal College and it was judged by Stephen Doherty, Gillian Cowburn and our very own Graham Gelder. Each young chef was given a complimentary chef jacket from McClure’s.

The winners on the day were;